MP MOLDS and me (by Gregor Hodnik)

MP MOLDS and me

I began casting with brass moulds when I got my first HP mould, made by MP Moulds, work of Miha Prevec. Before that, I was using traditional iron moulds with ladle/pot method and a gas burner. My previous experience was only with 9mm and 7mm RCBS moulds. First was a 2 cavity but this was too slow to meet my needs and the other was a non HP version. Although good for target work, that 7mm solid bullet was usless for any kind of hunting.

Now I have four rifle MP MOLDS brass moulds. One for 30″ cal, one for 5.56mm and two for 9mm. Since then I have also built my own bottom pour casting furnace with PID (copied from one smart guy) and bought a bolt gun in 300 AAC BLK just to shoot cast. I learnt some useful lessons. I want to pass on my experience with specific brass MP molds, so hopefully you can share these lessons.

I am describing (using a few of his moulds as an example) what procedure I followed and what worked well for me. I went through process of finding what works by learning from my own mistakes and by trying what other casters suggested. On my first casting sessions with brass moulds, I was not paying attention to alloy temperature neither did I preheat the moulds. But after I started to do all that, my results improved immensely and I got usefull bullets very fast.

MP Moulds 314140 (Sledgehammer PB HP/FP). I started with stick on wheelweights with approx 20% of pure lead. With all lead melted, dross cleaned, I fluxed a few times with a piece of wax. I had approx. 10kg of hot lead ready in that pot. As I said, this was my first time using a brass HP mould and my MP 314140 was just slightly pre-warmed on the edge of the pot. I didn’t know what the temperature of lead was or when the mould would be ready to produce good bullets. The lead was melted on a gas burner. I just started to cast and after 20 pours I had only wrinkled specimens. After that, I started to get perfect little lead bullets – all keepers. The short penta pins didn’t cause any sticking at all. They actually helped the bullets to drop out of their cavities faster. Once the mould was in the ideal temperature range, I just kept on  casting. 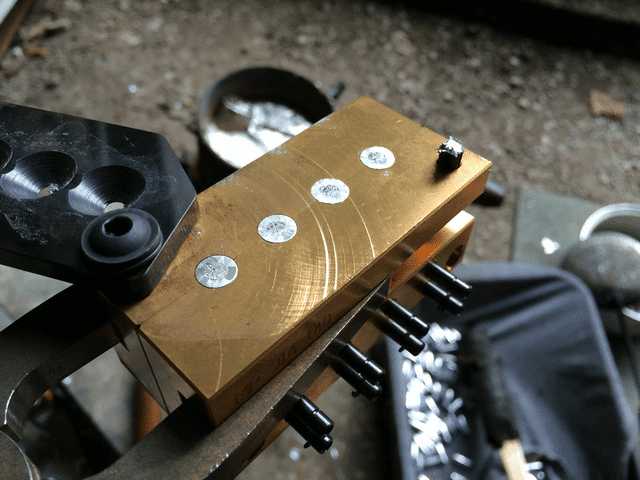 MP Molds H&G 38 Ness safety bullet (GC, HP/FP),  with very long pins, was initially an exercise in frustration since the brass mould  was neither prewarmed nor the alloy at the proper temperature. I got tired of pulling the rejects out of the mould. This is the only mould that really needed my full attention and knowledge about alloy temp. and pin heating. That MiHec Ness safety slug #38 for the 30″ cal, with 2 cavities is one long HP pin. If HP pins are not hot enough, the bullets will stick to them.

What worked: Preheat the mould really well until the lead takes around 10 or more seconds to solidify on the sprue plate. Miha recomended 415C/780F, and I used that.

Then cast fast and don’t stop. Once the bullets give the slightest hint of sticking to the pins, stop casting and preheat the mould again. Especially with those long pins, be sure that you don’t pour alloy directly in the center, but rather slightly off.  That way the alloy will not hit the long pins first and will not cool down.

With MP Moulds 312440 (Hammer of Thor, PB HP/FP) I really never had any problems with casting HP rifle bullets. None of my first brass moulds went through heat cycling, but I noticed that every time I used them I got better and better results. The same happened with a new 9mm 6cav SWC mould and 312440 Hammer of Thor. I did always preheat it before casting, but bullets started to basically drop out of the mould whan I opened it, that happened on my third casting session. Easy casting -»Hammer« was a pleasure too.

After that I did heat cycle 3 times my new 312159 (MP Molds 308 Hunting, GC, HP/FP) and after first 15 pours, and no special attention to middle length pins, I got usable casts. That bullet is the most accurate 30″ bullet I have and shoots fine subsonic and supersonic in my Ruger Ranch 300 AAC Blackout with 1/7 twist. It does not feed from its magazine, R.Ranch is made for long pointy bullets, but from what I have read it works fine in various AR-15. It also shoots and feeds excellently in my friends bolt action Savage Axis and Sako 85, both 308 Win.

I also tried MP Molds 180-SIL (solid, GC) bullets cast by my friend, and the bullet worked perfectly in every sense, feeding from my magazine, hitting the target…

I also cast a few hundred bullets from MP Molds 227-65 GC. After sizing to 226″, then attaching Hornady gas check and powdercoating, I got 63grs projectile. They were tested with good results in my .223 Rem Tikka Hunter with 1/8″ twist; I got a velocity of approx 380 m/s (1250fps) and a decent group at 63m, despite windy conditions.

Casting with 9mm SWC H&G#278 clone, (bevel base, 132grs) was a joy. Once properly warmed, the 6cav mould was practically raining cast bullets. Casting with 6cav mold, I had to alternate my casting front to back cavity and back to front, and that was the only trick that I had use. I started with 390C/735F, poured a few times, then dropped my temp to 360C/680F.

Same story with 9mm RNSWC (bevel base, drops 135grs with Lyman #2, 140grs with 50%pure/50% WW+tin) my last mould that I bought in February. Just a few heat cycles on a hot plate, proper lubing and not a single problem with it. I just had to raise my alloy temperature to 370C/700F, because the outside temperature (and in my basement) was 10C/50F and with an open window, my nozzle/spout freezed to often.

I did shoot 30” bullets into water, wet soft paper and ice, and these are the results I got.

I also shot a lot of bullets at targets, either from field positions or from the portable table with rest using my Ruger Ranch in 300 AAC BLK. I shoot mainly at subsonic velocities.